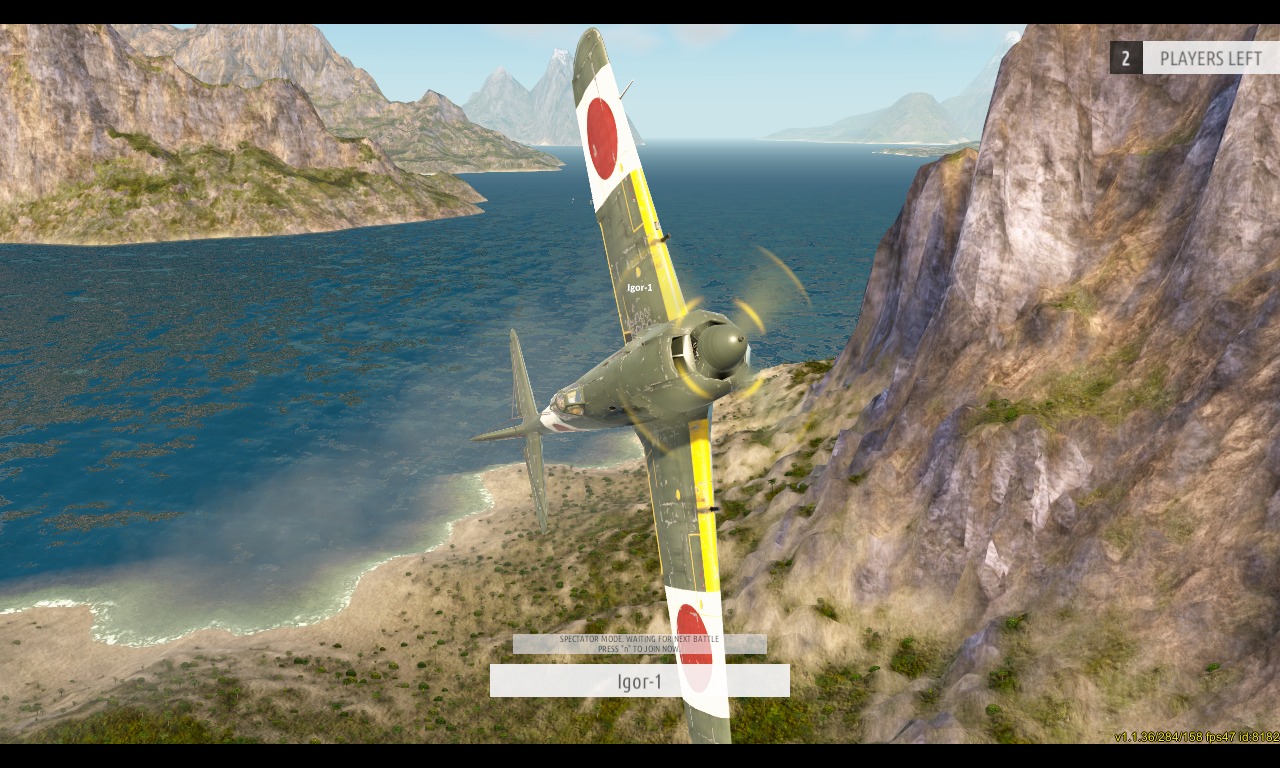 Thank you to everyone for playing Fighter Royale- Last Ace Flying. We have been listening to your feedback and released a new, super fun-to-play update of the game! The update addresses some key areas that needed tuning or redesign.

Our play-tests suggest we are onto something very special with the new improvements. The game is ready to be updated here Download

1)   More Fun in Just 20 Minutes: From the moment the battle begins, your guns are hot. Capture as many Power-Up parachutes and plane upgrades as you can in what can feel like a Roman Chariot race. The sky is now filled with enemies playing a deadly game of cat and mouse.

Most games can now be played in twenty adrenaline-soaked minutes or less. Even the ending-phase has changed with a moving safe area that will challenge your piloting skills as you fight to be the Last Ace Flying.

2)   Improved Mouse Control: Our mouse controls have been revamped with lots of juicy technology to make flying feel much more natural.  Pilot controls are now smoother, more fluid and responsive. Increase your maneuverability further by using the “A” and “D” keys to evade enemy fire or chase down your prey.

3)   More players than ever!: With the growth of the Fighter Royal community, you will see more pilots in the sky in every match. Most games now start with fifty pilots. With twice as many pilots in the sky, enemy kills are more frequent and survival is even more rewarding.

4)   Easier to find Enemies: We received a lot of feedback on how difficult it is to identify enemy pilots. We have made it much easier to find enemy planes, even at distance. Now, when planes fly at 80% throttle or faster, they leave trails of smoke behind them. These contrails are tell-tell signs of enemy flight paths. Use them to your advantage to hunt down other pilots. You will see a lot of improvements to make it easier to spot your enemies.

5)   More Lethal Dog-Fights! With improved enemy visibility and plane controls, dog-fights are way more intense. An enlarged targeting reticle makes it easier to track enemy pilots and lace them with Machine Gun Bullets or deadly Armor Piercing Bullets (APB). Bullets and APB along with a new aiming mechanism were tuned to make it easier to shoot down planes.

Increased damage from bullets means you can take out enemy planes faster. It also means you need to keep a close eye on your plane’s damage. Luckily, our improved User Interface lets you keep on top of your weapons inventory and damage to your plane.

6)   Earn More FREE Play-time! Earn Make it Games (MIG) tokens using the in-game app. One hour of app-time will earn you one MIG token. In ten hours of mining you get ten MIG tokens! That is enough for a 30-day Fighter Royale- Last Ace Flying subscription.   Just keep the launcher with enabled “Fighter-Royale-Worker” for a night and play to Fighter Royale 30 days! You can chose when how and when you earn MIG tokens, it’s all under your control!

7)   User Interface: Use the “F1” and “TAB” keys for a quick read on key plane systems and game information. Also, be sure to check out the Spectator mode. You can follow different pilots using the period and comma keys. This is a great way to learn some new combat tactics and see who is the Last Ace Flying.

We now have in-game hints and tutorials. They are super easy way to learn about controls and different tactics. We hope you enjoy the changes and look forward your continued feedback.